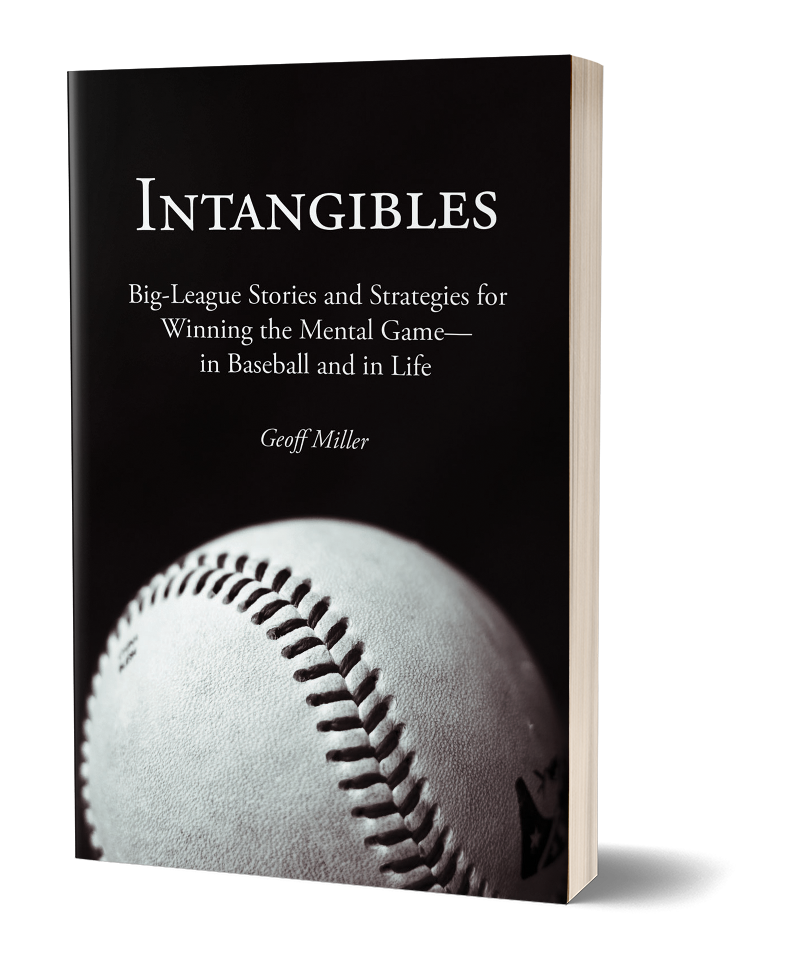 Downloadable materials from the book:

Intangibles may be ordered from any local bookstore. Discounts are also available for bulk purchases (25+). Please contact us for more information. Cover photograph by Tyler Wainwright

“Geoff Miller, the Phillies mental skills coach, has impressed me with his knowledge of how a player can identify and manage his “mind” game. This part of the game has been overlooked in favor of the routine physical activities. Today, as the game is hiring coaches like Geoff, valuable information is becoming available to help players improve which leads to more wins. Intangibles has become a favorite of mine. If you are an aspiring ball player or a major league player, I highly recommend this book.”

“One of the most remarkable books to come out in years is called Intangibles by Geoff Miller.”

“Intangibles is filled with lessons and tools for helping baseball players in all stages of their development.”

A must read for all baseball players, coaches, and fans…

Foreword by Vince Gennaro, author of Diamond Dollars: The Economics of Winning in Baseball

Mental skills coach Geoff Miller has spent years helping professional baseball players improve their mental toughness—both on and off the field. Now, he’s making these invaluable lessons available to everyone who loves the game of baseball.

From high school to the Major Leagues, all baseball players struggle with competition, pressure, and their own personal challenges. This book, through inspiring stories about professional baseball players in various stages of their careers, as well as hands-on tips and questionnaires, will help players evaluate and improve the mental skills that are necessary for that competitive edge.

In Intangibles, you’ll find stories, instruction, and practical applications that teach players and coaches how to put forth their best mental games—portrayed through the eyes of those who have experienced those learning moments firsthand in their quests to become Major Leaguers. From a local park’s baseball diamond to dusty minor league dugout benches to the musty concrete tunnels under Major League stadiums, Intangibles meets players where they are, offering specific ways to improve performance and outlook.

Whether you hope to be a big league player someday, or whether you simply want to play your best game, this book is essential for all athletes who want to learn how to overcome fear, build confidence, and develop a mental framework for success.

What You Can Learn From MLB’s Mental-Skills Coaches: Geoff Miller is interviewed in The Wall Street Journal

“Geoff Miller is insightful in explaining the mental aspect of baseball with real issues, simple terms and practical solutions.”

“I am convinced that this book is one of the best compositions written on the mental aspects within the game of baseball.”

“Geoff Miller has devised a virtually flawless program to assist anyone who aspires to become a winning major league player.”

“A must read for athletes looking to gain a mental edge or simply better identify their own strengths.”

Geoff Miller was hired as the Philadelphia Phillies’ mental skills coach in 2016. In his role, he is a resource to Major League players and staff, is involved in player development at each level in the minor leagues, and he assists the scouting department with psychological evaluations of potential draft selections.

Geoff joined the Phillies after a fifteen-year career (2001-2016) as a founding partner at Winning Mind, LLC, a San Diego-based consulting firm specializing in performance under pressure and working in corporate, sport, and military environments. While a partner at Winning Mind, Geoff managed sport programs and conducted corporate coaching programs and talent development using applications and tangible lessons from the sports world. Geoff has provided mental skills coaching services to the Pittsburgh Pirates (2005-2009), Washington Nationals (2010), Atlanta Braves (2010-2014), and Los Angeles Angels (2015-2016).

In addition to his work in Major League Baseball, Geoff was a resource to player agents and amateur athletes in all sports as well as to corporations. He has consulted with such corporate clients as Pandora, MetLife, Chick-fil-A, and Genesys. He has lectured to a diverse mix of audiences, including Leaders in Sport, the SABR Analytics Conference, the American Baseball Coaches Association, the Golf Coaches Association of America, and the USMC Wounded Warrior Regiment. He has led intensive academic skills training programs for NCAA football players, headed up golf psychology duties at Okemo Valley Golf Academy in Ludlow, VT, and has developed programs for retired athletes transitioning into new careers as well as for teaching young athletes how to become role models in their communities.

Intangibles: Big-League Stories and Strategies for Winning the Mental Game—in Baseball and in Life

The Art of the Global Gateway

Think Outside the Country